We arrived to Cozumel yesterday, after traveling almost 20 hours, but now we are here and the race will be first on Sunday

Cozumel is a rather small island by the Yucatan peninsula, and this time of a year the climate should be driest and coolest during the year. We just cannot feel it at least now, as there has been some very heavy rainstorms pouring down both yesterday and today, leaving the streets full of water, and for us the weather is really warm and humid (27/80%). There are quite many cruise ships anchoring to the harbor all the year around, and this means a good amount of tourists as well

But now as the Ironman is approaching, will most of the tourists be triathletes  (2500!)

As Cozumel is an island, without a big airport, we chose to fly to Cancun, and continue from there with a taxi and the a bicycletaxi the last 500 meter to the ferry, then 30 min of sailing, then another bicycletaxi for 5oo m, and then another taxi……..it is just so great to travel with 2 bikes

The flight itself took around 14 hours, and it took us additional 4 hours to get to the hotel. And when we arrived to the hotel we were totally exhausted, not just because of the heat and humidity of the air… So fast packed out the bags and some mexican food, and to bed… at 19 o’clock

and yes, I did feel totally busted, so before you decide that Cozumel is your race, be ready to travel.

Today we had swim on the route at 7.00……and what a swim! We walked across the street, into the water, and the beauty of corals and the life around it, gave us company for the whole swim.
Swim is just marvelous:1 round of 3,8 k,  you swim in the crystal clear water with lots of fishes, and the temperature is around 26-27 c, and the water is totally flat. A minor thing might be the strong current in the first half of the swim… But you get it back in your speed when returning

In the afternoon Frank had to put the bike together, and so my bike/run session began. 60k = one loop on the bike with some different exercises put into it, and the a 15 min run after.
Bike is a 3 loop route almost  around the island. We had heard about the strong crosswinds blowing in the east coast, so we decided to make a loop and check also the east coast.
The loop is pancake flat on an OK asphalt .
The east coast is YES, very windy…! Because  the wind is normally from east or northeast,  it means that as the bikeroute is not fast, as you dont get the same wind in the back, as it has to travel across the island, where you bike behind tropical forrest and hotels, so……..flat but tuff it will be on sunday. AND beautifull it will be, as this windy part, is just wild coastline, with beaches, rocks and green water.
The waves are coming in, and making the air even more humid and you have a feeling that the salt from the sea is flying in the air together with some sand… Well this piece of the route is only around 15 k, you just have to pedal it 3 times…
Well, on Sunday I will be fully fine with the climate and the day rhythm, so I am sure that it will be a great bike after all! 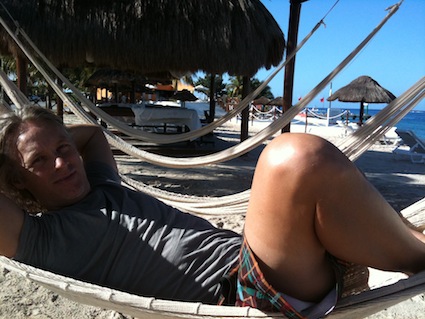 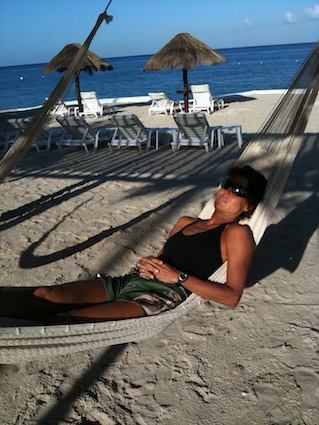 It also has to be relaxing in between the training sessions:-)