In a day when my swim was ok…. and my bikeleg was poor (because of all kind of mixed reasons…aarrgghhhh!!) and my run was just great…so now … even with some not-well-done-legs I can call myself as a Danish Champion in long distances, cool! 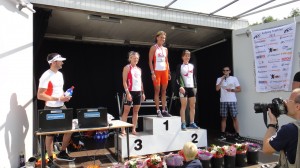 And all this in a day, when there were so many triathlon races in Europe, to name some of them : European Champs in Frankfurt, where in PRO women category the Danish Camilla Pedersen won with a danish record, reaching a time under 9 hours in Ironman, strong effort and credit from here !
And in Frankfurt there was also Thomas Dessau, one of Frank’s triathletes and he got a Hawaii spot!!! Jeeah, could not be more fantastic! I know he was working hard for the spot, with a plantar facitis in his foot during the winter… He was focused and he really wanted the spot, and he got it, great, with a lot of patience and support form the family, it worked out perfect, so congrats from here  !!
There was also Norway 1/2 Ironman race in Norway, where Michelle Vesterby was racing, and taking a good 4th place, in a race where ex-doped (sorry to say, but this is how it is!)  woman took 1st place. I will not go further into the problems that this gives, will only congrat Michelle, on still racing in her mid-season, and yes….I know what will happen now…..she will build towards her real topform and goal, Kona in october.
And even “the Man” Dave Scott was racing in the same race, and racing  in his agegroup to be number 2

He is the Coolest !

Thank you for a super arrangement for Ålborg Triathlon Club… Amazing the way you handled 1200 triathletes swimming biking and running, and all the way through!!
And thank you for my sponsors to be there supporting me to be a Danish Champion; Fusion and Endurance Sport;  the super clothes with the cool prints !!! Garmin: what to do without your GPS watches, Brooks: they make a difference, Udo’s Choice nutrition oil, it is not only my bike that needs oil ! , and  Kildeskovshallen; you give me the possibility to swim train in a quality place !

What else can I say, than it was great to see SO many good triathletes in Denmark, racing so hard today. Well done, great results, congrats for all of you!!
One more thing I want to say, to win in a race , it is so difficult these days, as there are so many very good triathletes around. Today, for me, in my agegroup, to win, it was not just so easy. There was an ex PRO triathlete, ex-European Champion Karin Jørgensen with, who was really doing it well, until I got her in the run… and after I got her, she was pressing me very hard… maybe without her, my run would not have been what it was. She was tough couple of years ago, and she is still tough. So thank you for her!

and running and thank you for my support team!

PS, it was the first hot day in DK this year for me, and I can tell you, that I used NUUN electrolyte tablets for the first time today, and it was a good first test, they are for good for me, and my stomach and legs worked all the way, so…NUUN rocks