Finally we got to Kona Tuesday afternoon, after 6 hours flight from L.A. Long way to Kona, but I am happy to be here now, and even the heat feel already ok.

Having a training run in Kona

Actually I must say, that I am very greatful that the navy soldiers in 1978 decided to make the race called Ironman on Hawaian Islands; without these guys we would not be here. By competing in Ironman, and being qualified to World Championships gives me a goal, a ultimate test of my body and soal, and it will be a part of me forever, sounds mabye a littel to romantic, but that is how it is, it changes you forever !
It also gives both of us a great possibility to see the Big Island  its culture and nature, and it is beautiful so far

And how is the training  and tappering going then?
Yesterday I had a bike and brickrun in myprogram. We took our Jeep and drove along Queen K  highway to the start of Energy Lab (a part of the marathon, called like that)and I started my ride from there. And there she was on her bike as well; Chrissie Wellington (PRO  winner 2009) coming back from her ride, she is SO COOL!! 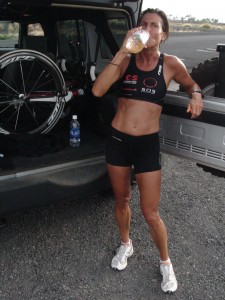 I was really excited to get started with the bike; feel the hot sun and asphalt, feel the winds everybody is talking about, and just sit on my bike again. And what  can I say;
– it is hot, but not to much warmer than training in mediterranean in the summer heat. It might be a bit more humide, but I dont feel it a big problem so far, I actually like when it is warm and sunny.
– the winds, yes they are there and blowing from everywhere, sometimes you have sidewind, and sometimes headwind, but it can even be with you, but what I dont like too much is the gusty winds, and they are there as well. But it is just to look around, see the nature (the long lavagrass will help me, it will tell me when a gust i comming ahead) and enjoy the senery, it is so dramatic and beautiful.
By the way, this is really a vulcano island, lava all over the place. (mabye that is why it is so hot

)
– the route itself, rolling hills, long ascents and descends, and I felt that the descents were very long; I was flying!!! The training Frank had done to me was some spinning and long session in Ironman speed.

Back by the car, to the start of Energy Lab, where Frank was was waiting for me in the car, change and on with my new Asics Kayano, running shoes. 45 min run on the famous Energy Lab, that is about in the middle of the marathon, and decending down to the sealevel, and coming back up again. The 45 min included 10 min tecnics and light running following by 5 min frekvens training. The challenge  normally in the Energy Lab is the heat, and the small hill on the way back. And ofcourse Energy Lap is in about 25 k, where the Ironman-legs normally start to be very heavy. I had good legs

After a good night sleep,we were fresh at 6 in the morning to get on the swim. We had planned to swim the racecourse, and 3,8 k.  By Kailua Pier, there is a tent with information, place to leave your stuff (towel, sandals etc)You can even get water, and shower after your swim. Water temperature is about 27 degrees, so it is ok even without any speedsuit. I will do my swim in the race with the long Blueseventy Zero+, so I had it on also this morning. There was some buyos to swim to, but not the real race ones yet, but no problem, the swim could be done anyhow, like planned. It was just marvellous; looking at all the corals in the crystal clear water, no freezing, and no ruffy water, but some long waves to swim on. The trainig was just great! Almost like swimming in the aquarium:-)
We were a bit unlucky though; no celebrities swimming this morning, anyhow lots of other athletes already.

And after it was time for a good oatmeal breakfast, with fruits on side, and a cup of great Kona coffee (they grow coffee on the island, and brew delicious coffee)I allow 1 cup coffee for myself in the morning, but just in the morning, to be sure of a good night sleep

Stay in touch, more will follow therse days, hopefully I even get some pictures in  and well…..see you out there (if you are here on Big Island,, Hawaii)