After the Garda Lake the training, i continued in the High Alps of Italy. Super climbs from the village of Bormio

Bormio is known as a ski resort, but also known for a couple of great climbs, classic Giroclimbs like Passo Stelvio and Gavia. There is one more , that are very known in the cycling world; The Motirolo. Mortirolo is absolutely the toughest one, with the max %  of 18! And there is the Pantani memory statue on the way by the route.

Frank and me decided to ride the Stelvio first, and got nice 110 k, with more than 3000 climbing heightmeters on our Garmin watches:-) The % were changing during the climb in between 7 and 14%, with an average of about 7%. Our route started from Bormio, got upp to Umbrail pass (2500 m) , after down to Switzerland, Santa Maria, then back to Prato dello Stelvio and climb up to the Passo. The climb goes up to 2700 meters, and on the summit you can expect a fresh and cool mountain weather taking you against, it can even be snow during the summer

So remember your arms and knees, and a pair of gloves are great also to bring with. The views are fantastic, try to imagine when looking at my pics.

2  days after Stelvio, we had to try to do the worlds toughest climb: Mortirolo from Mazza, this is what they write about the climb:

“The Mortirolo is considered to be the toughest mountain one can climb in Italy and many professional cyclers consider it as the most difficult mountain to be climbed in any of the three major tours. Lucho Herrera (1991) referred to Mortirolo as being the “Queen climb of Europe” and Lance Armstrong referred to it as the hardest climb he’d ever ridden.  The Mortirolo is situated in Lombardy. Starting from Mazzo, the Mortirolo ascent is 12.4 km long. Over this distance, you climb 1300 heightmeters. The average percentage is thus 10.5 %. ”

We did the climb with Frank, got some 100 k all and all in our powermeters, and were pretty “done ” when back in the hotel. And the weather had changed from the heat to more cool, so on the summit in about 2000 m it was just above 0 degrees…  But like Ironmen we are, we enjoyed the ride, with marvellous scenerys again.

I like so much to make these trips to the really high mountains: I enjoy the nature fully and the beautiful views along the way. It is not enough time for a real altitude effect, but for me it works good on the strenghts in my legs. So instead of the
low-gear-heavy-muscle-tension-until-you-fall a sleep-exercise, I love when I can build strength in the mountains instead.

I really love it.

See you on the mountains

Couple of turns to go before the summit 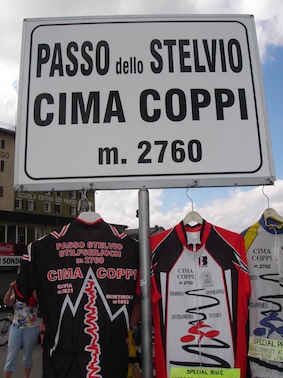 The summit of Mortirolo