In the goal after 10hours53 min 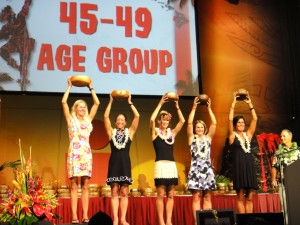 There is alwas many plans and dreams, and you go for them, and some works out, some not.
It is the total result, and it is TRIATHLON = you swim, you bike and you run. They all affect each others, and so I dont spend too
much time looking at each part in very small details.
My coach does, but that is more to learn, and that we agree what we can do better next time.
So ….
was I ready = yes, my tapper and preparation was good
did I race well = yes I think so. I reached the podium, and that is pretty f… hard in Kona. Here I also give myself credit, because of the top ten in my agegroup, all are 45 to 47 years old, except me…I am 48. And that means a lot to me in a race
did i make any mistakes……..no….I dont think so….not big ones………just tiny-little ones, and nothing that could have changed all.

I got out of the water after 1 hour and 14 min. Not good….and that gave me a little stress in T1. It is so difficult to do all right in T1, specially if you are a little dissappointed of the swimtime, as I  had hoped for 1.10
I think that gave me 20-30 sek too much in the T1, and so I really got a slow start you could say.

So what did that mean for me…  in all races with a mass-swim-start, there is some big groups taking off when they hit the bike.
Being in Kona, and being in the World Championship, there are plenty of black-white shirts out there, and they try to cover it, give penalties and break it all up, but there is always 2-3 big groups in the first 1 hour, and that is free speed. I didnt get on to that train, but I knew that some of my biggest competitors did. That is the part of the game, and as soon as you are out on Queen K Highway, it starts to brake up, and slowly it becomes a fair race. In drafting point-of-view, I am very happy that did not get into that train. I think it is a pity to this sports, that this happens, with  many groups on the road… meaning that many are actually just racing unfair part of  their ride

Also in my agegroup… because I see it in different racetimes, that people do things much above their normal……and so is the game.
With this in my mind, I decided to hit hard on the bike, and get to Hawi (turningpoint about 100 k out) as fast as I could, with just enough in my legs to go ok speed home. That is how I did, and it worked out good. I rode 5.40 and that moved me from 20 place after the swim, to number 12. I was ok when I came the last 10 k home, even the heat was starting to get at me, and the head wind ,which was not crazy but a head wind, coming home the last 50-60 k. There is always stories about the strongs winds at Hawaii, and the heat and the headwinds, and the heat…….and….and…….
It is Kona, and it is superhot, and it is not a easy ride. My 5.40 effort, would have been a 5.10 on a fast course ( I think…maybe 5.15)
so it makes you work hard, and I did.

Starting the run, I had agreed my pace with my coach, and then adjust it very little,  to how I feel, weather ect ect.
But I knew I was number 12, so I had to push.
I ran the 16 k that goes on Ali drive and in town, in hard pace. I wanted to see if the other women had something after the bike.
When I hit Queen K, I had moved to number 8, still minimum 3 to go, and I was starting to feel the heat.
On the highway there is no place to hide, but that goes for all of us, so I stayed on the plan, kept pace, and got to the hot energy lap.
I decided to give all in energy lap, and then see at the top, what that would bring. This was one of the plans that I had made with my coach, but only to be used, if I needed the mental energy to get into the podiumplaces = top 5, and then hope that this mental energy would take me the 12 k home to the finish.
I came out of energy lap as number 4 ! I had done it, but now my legs were dead. They were not doing like I wanted anymore.
From here on and home, it was all:  keep you body up …….dont walk…….drink…….run……keep the style…..dont fuc…ing  walk……run in the aidstation………keep running……..this is it………you love this….this is what you want…..this is when you prove you are strong……..right now……keep running……
with 2 miles to go, a canadien woman ran by me, I stayed with her for 400m, and then I saw my 4th place go away.
The problem is………that I was not sure if I now was number 5 or 6. I had lost count, and I couldnt think clear anymore.
I was starting to be desperate. Running down Palani, a steep 300-350m road I could see that she was not running well down.
I gave all, I got 100m from her, then we turned left, and got on flat road again, and she started to move away again.
I was less than 1k from finish, and I didnt know, if it was my podium that just ran off in front of me. It took all my last energy out of me, I could feel the tiredness filling every corner of my body right at that moment.

I crossed the finish line… and was finished… very finished… 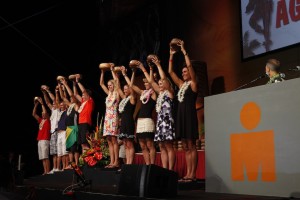