All and all great day! I am happy and satisfied, even I did not make it  under 5 hours… So I still have something to go for:-) See the results from http://www.wasserstadt-triathlon.de/ergebnisse.html and Mitteltriathlon. 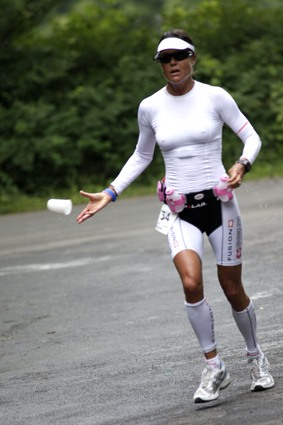 But shortly to say; I made my PB in the distance, won my Age-group 45 to 49, and even had best time  in the AG 40-44, of all the women in the race i was number 7, and beeing a half ironman, the agedifference gives the younger girls an advantage, because the speed is harder to keep the older you get.

This time I had a tappering of 2 weeks for the raceday, and it worked out to be fitting for me; if this sounds like a long tapper, then just remember that it is different to tapper when you are 25 than 45

Note, that i really was traning hard untill the beginning of the taper, really hard.

The day did not start very promising as in the morning it was 9 degrees, gray and still raining. The weather forecast was anyhow looking good; clearing up in the afternoon. And actually it also did! 1 hour before race start it stopped raining, and this gave even better motivation for the day.

I have to say that all the race I was pushing well, not less not more, I had a good feeling all the way. With the help of Frank who was chearing up for me during the bike and run, I did a really good race. It is a great feeling to have support during the race, and to know there is one who is having “an eye” on you during the day. Frank did a big job, sometimes it must be challenging to be a coach, both mental and physical, specially as the same time you are a husband, but it works if you  decide that it does!

Hannover Limmer triathlon is a good arrangement: swim is done in a river with clean and mostly still water, cykling is a 3x30km round with 500 heightmeters it total, mostly good roads adn some short hills, and run is done in a nice park area around Hannover. The race is almost never sold out, so you can even come on the spot and sign up. Hotels are easy to find form the city, and it is easy to travel to there by flight or car.

So it was a good start for the season, giving status of my condition so far and giving some hints of what I can concentrate in my training. As I told you before I was well prepared, so I chose not to compete in my swim clothes, this means that my T 1 was enormous long; as i chose to put dry clothes, insted of having it under the weetsuit as normally. This ment putting my 2xu compresion shirt and socks on in the T1 zone, a preatty hard task, when you are wet and cold from the svim.
But when it was on, it ment I could have a great ride on my bike, from the start, instead of getting cold muscles and struggling to get varm. I had the 2nd best bike time of all the women in the race, only the winner of the total event for the women was faster, so I think the tactics was good. Also Frank wanted the race to provide us with usefull information, for the coming training, and that is doubtfull, if you are to cold from the start.

Soon you can see some pictures as well from the race on my site.

Comments are closed, but trackbacks and pingbacks are open.