Believe it or not, this morning we were up 5.30 to pick up Craig Alexander for a morning swim. 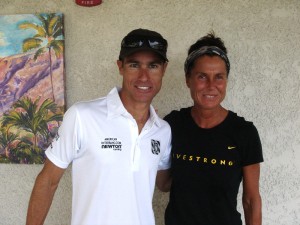 After the morning swim with the World Champ Craig, we were still friends even though he was beating me big time. Surprise!

I must say, that saturday will be one of the most memorable birthdays I have ever had so far, but today was a very special day as well. The World Champion from last year is living with his family, in the same hotel as we do. Frank talked with him, about a new idea to make some shoots of him during one day, following his preparation for the race. He liked the idea, and so the day started with all of us, going in to the Pier (=raceday swimstartarea) and really early, to try and get 1/2 hour swim done before to many people got there.

And now,  as I am relaxing and writing my story in the hotel room, Frank is out shooting with him, as NBC tv-channel is doing interview With Craig down in Kona.

So far the only thing I can say is, that his day sems to get pretty full, not with training only, but all the other stuff; manager, sponsors, TV, radio, interviews. As asking him about his relexing, he says, “yeah, these days it is not so easy”. This is how it is to be a World Champion.
And beside that, his is really nice and  has a supernice family, just really nice people it seams like.

I will put a lot of photos about this, but later when Frank has had time to find the best of them, something to look forward to, like i look forward to raceday more and more…….  see you out there, in the heat.