As the media informed last week, Torbjørn “Thunderbear”  Sindballe decided to finish his Triathlete career, because of healthproblems, and more exact: problems in his heart.

This must have been a hard and difficult decision after so many good years as a great athlete, and with a 3rd place  in World Championships on Hawaii a few years ago, he was close, and still at the top of the game.

I did see Torbjørn as a fantastic athlete, for instance because of his way to try to find new methods all the time, to be better; like white compresion clothes on Hawaii, ice cubes in the clothes during a race, white cloves etc. 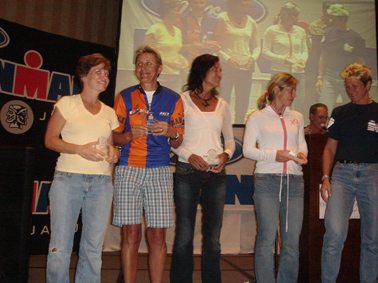 The picture taken by Torbjørn

And even he made it all the way to the top, he still kept his feet on the ground.
Let me give you a good story to prove this. In 2008 IM Florida, he was 2nd in the race, trying to get the first place and the good money price. I was with doing my own race, he was running the last round in the marathon and I just had started.
He passed me and when he saw that I have www.endurancesport.dk team clothes on(a shop he knows well in Copenhagen) he smaked my behind, and said “Good Denmark!” I think it was cool

But Frank did not  necessarily agree with me.
Anyhow Frank was fine again later in the evening in the awards dinner, when Torbjørn was sitting in the prime seats by the awardsdinner, and offered to take some shots of me with our camera, when I got onto the podium

There is something special about that, you know ” when the big stars come down to us”.

Thanks Torbjørn and hope you are fine with your decision, with your new way of life!

Comments are closed, but trackbacks and pingbacks are open.