I just read a book, amazing book, what a guy…well written…a book of a guy called Scott Rigsby. He was not too lucky in his early years, but got all out of his life anyway 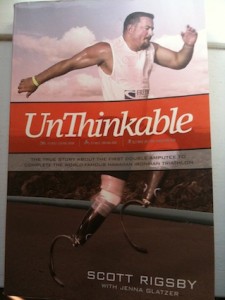 When you read this book, it is almost like doing an Ironman… You really get into it.
Scott was always a sporty guy… but already on his early years he got into an accident and got injured… badly! He got injured in his legs and later on lost them both.
He did not know how to continue his life until he found out to do the UnThinkable and that was not less than an Ironman! And Ironman on Hawaii, Kona, that he even made in under 17 hours.  And Scott made it without having legs!!!
By doing this, helped him mentally, he wanted to live again, live fully!!  Amazing power and mental will, if you have it, you can do it; with or without legs…
Read the book, and see you on the roads, having more strength with than ever