Is Craig going to win on Oct 9 in Kona, here is my guess……This year, there will be a photostory in the German Triathlon, special Kona issue, that they give out for free in Kona.
The story shows how a day goes, for Craig 6 days before the race 2009. Frank made it by following him, and the idea is to show what goes on behind the scene. Frank wants to show, that there is a life and person behind the tuff racepictures we always see.
So back to to point.
As Frank was a lot with Craig in Boulder, trying to make a new story, the photostory of Craig´s Boulder build up for Kona.
This gave him and also me, a close look at what makes him so special.
What all the people around him says, is that it is amazing, what training he can do, and the way he does it.
It looks like he takes the best from the old school of volume, and puts the new knowledge on intensity and tecnic into it.
You just dont find one that is not full of respect of how he trains.
This is why I think he will be the champion this year.
Not because it is 3-in-a-row.
Not because of the pricemoney.
Not because of the fame and historybooks.
No, simply because I have never seen anybody train so hard and still understand what his body can take, and what makes it stronger.
And one last story to back my guess up:
On the last part of his 6 weeks build up, he went out for at 2 hour morningrun.
Who did he invite with as a partner for the morning ????

Well, just the local star, that had posted at 1.08 run at a 70.3 race just 2 months earlier.
When you do that, then you are not looking to boost your confidence, well……you dont need to either, you are just there, confident and in balance, and that is what makes Champions. 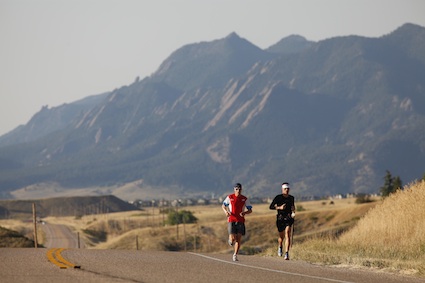 Stay tuned, as Frank will let me get some of the shoots he made with Craig. And I am sure he will give the storys behind also.